By the 7.2 million Instagram pictures I posted from my Sydney trip, I’m pretty sure people thought we were in Sydney for months, but actually, we were only there for 2 days! The main focus of our trip, aside from getting to check out a new place, was to see the NYE fireworks. That means other than NYE, we pretty much only had 24 hours in Sydney to cram in as much touristy stuff as possible. It by far wasn’t enough time and I definitely want to go back, but 24 hours was better than nothing!

A few people we’d spoken to had said that it wasn’t worth the drive up from Melbourne if we were only going to be there for a day or two – but NYE is literally once a year, who knows if we’ll even be in Australia next year, let alone close enough to Sydney. So we bit the bullet, did it anyway and don’t regret a thing! Flights were around $400 each for a return from Melbourne on the dates we wanted, so considering we’d just bought a car – we figured why not use it for our first border-crossing road trip. It took us around 9.5 hours and two petrol fill-ups each way, so overall a LOT longer than taking a flight, but also a LOT cheaper. 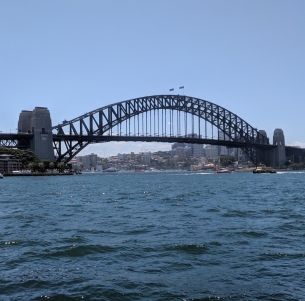 Our AirBnB was in Chadstone – around a 20 minute drive from Sydney’s city centre. On our first night, arriving at around 8pm and totally exhausted from the drive, we decided to grab some dinner and crash out. We headed to Hawker Lane – an awesome little food market with various street food stalls, made to resemble the popular hawker centres in Asia. After both smashing through a plate of chilli pork dumplings for a starter, I excitedly munched down on Pav Bhaji – a popular Indian street food that I had fallen in love with during my time in Mumbai! The food was delicious – and to anyone in the outer suburbs of Sydney, I’d definitely recommend having a quick, cheap meal there.

The next morning, I started Googling my way through the list of Sydney restaurants and food spots I’d saved from various Insta posts and blog mentions, trying to find us a nice brekkie spot. Sadly, at least 80% of the places that had been on my ‘must eat’ list were closed over the NYE period – adding yet another reason why I ‘have’ to go back ASAP! Thankfully Hattrick Café had stayed open and we had a delicious breakfast in their gorgeous indoor garden style space. I devoured smashed avo on toast (my fave brekkie item) while Kenny had the French toast with bacon and Nutella – way too sweet for me but extremely photogenic! Finishing our meal with milkshakes we were finally ready to head into the city. 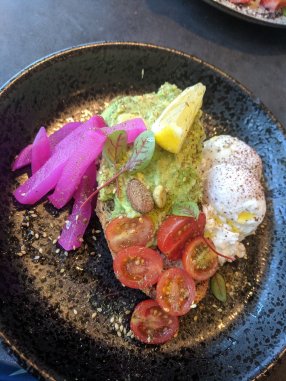 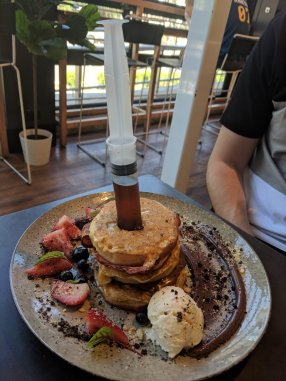 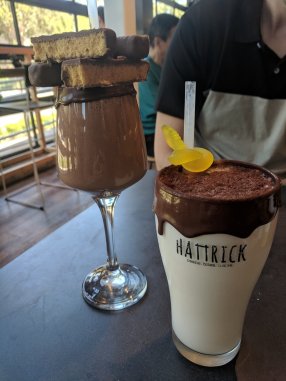 Being that it was a Sunday, we decided to drive into the city and park in a garage, knowing that it would be pretty cheap on the weekend. We had all day parking for $15 and it was nice knowing that we didn’t need to buy a travelcard (although we later found out that you can use your bank card to tap & pay on public transport here!)

Our first stop was, of course, to see the famous Sydney Harbour Bridge and Sydney Opera House. We wandered around the different viewpoints for a couple of hours marvelling at how beautiful they both were! The Opera House was a lot smaller than I imagined, but just as impressive. Both landmarks are so central in Sydney that you can wander around for ages and still see them somewhere in the distance.

Being in Sydney was the first time since being out here that I truly felt like I was in Australia. Something about the vibe, the views and the mix of beach/city really hit home that I was here. Being in Melbourne for the past 6 months – although a great liveable city, always felt very similar to the UK. Here in Sydney, I finally felt like I was over 10, 000 miles away!

Next on the itinerary had to be a Sydney Beach. We originally wanted to visit the famous Bondi Beach – but without taking the car out of the garage, it was pretty far to get to, so we settled on leaving that for our next visit and instead taking the ferry to Manly Beach. The ferry was a great way to see some more of Sydney and an incredible way to get a cooling breeze as a reprise from the heat! We didn’t venture too far out – deciding to stick close to where the ferry had dropped us off, where there was a bank of sand and a small grassy area nearish to the main road. Not exactly a remote beach haven – but we still loved it! We sat at a little bar overlooking the water, sipping on fruit ciders and watching people paddleboard and divebomb into the water from the deck. It was a super relaxing vibe and such a gorgeous day, we could have stayed there for hours longer than we did.

When we finally managed to drag ourselves away from the beach and back onto the ferry into the main part of the city, we were starting to get pretty hungry. So we ventured out on a long walk with no specific destination, ending up in Darlinghurst, one of Sydney’s inner suburbs. Scattered with lots of cafes and restaurants, we decided on grabbing some sushi from a little place called Don Don. Super cheap lunch deals and huge portions that tasted great ended up being a total win for us. 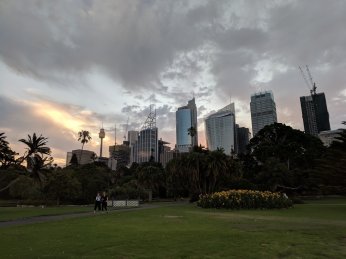 Burning off our sushi calories, we headed back, this time to the Sydney Botanical Gardens. En route to the gardens, we saw lots of tents set up with people camping out ready for their early headstart on the NYE vantage points for the next morning – insane! The gardens were beautiful, definitely recommended for anyone visiting or living in Sydney. Not only are they huge, picturesque and extremely relaxing, but they also provide some of the best views of the city you could ask for. Considering I’m obsessed with skylines and landmarks – this was my ideal spot to spend watching the sunset, with a massive smile on my face and love hearts practically in my eyes!

Our day was pretty much coming to a close, neither of us hungry after our huge sushi binge at lunch, so we vetoed dinner and just walked around Sydney Harbour, before heading back to our Air Bnb. The city looks even more gorgeous at night time when all the lights come on, but as a night owl, I’m possibly a little biased!

As an itinerary, we easily could crammed in some more, so this is more of a diary entry than a travel bloggers advice in retrospect! Because Sydney had stolen a piece of my heart, I didn’t feel the need to cram in every tourist spot and local recommendation as possible because I know at some point I’ll visit again. So instead, we took the day super easy, walked what was probably close to a million steps and enjoyed doing the things we wanted to, rather than rushing through a ‘must visit’ list. We had the best time – Sydney, we’ll be back! 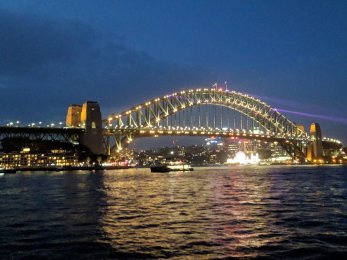 If you want to read about our NYE in Sydney, check out the blog below! :)