So, after enduring cold, miserable, back-to-back winters after moving from the UK, we FINALLY experienced heat in Australia! The first day of Summer and what better way to spend it than by going to a water park?! Our choice was Adventure Park in Geelong, only an hour and a half from Melbourne – and rated very highly! 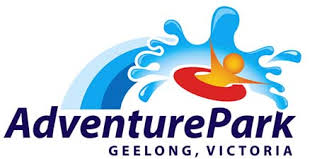 Both of us were water park virgins so didn’t really know what to expect. All I knew was that in regular theme parks, the water rides were always my favourite, so I was super excited to give it a go. It was $44.50 for an adult ticket, then an additional $12 for a locker that you could use all day. Before arriving we were a bit apprehensive that it was more for kids and families, even though we’re big kids at heart, but thankfully it catered to adults just as much as little ones!

It was pretty hard to pick a favourite water ride at the time because they were all so much fun – but looking back, the ‘Aqua Racer’ ride took the top spot for me. Laying on your front on a foam mat and rushing down the bumpy slide was exhilarating! You get soaked and getting timed at the end to see who was the fastest was an awesome added bonus.

The lazy river that wrapped around part of the park was the perfect opportunity to take a moment to relax. You sit in a little tube and float down the river at a super chilled pace. Although it was packed with lots of other people, somehow it was still extremely pleasant way to unwind, as well as being a great contrast to the other faster, wilder rides.

The ‘Gold Rush Rapids’ and the ‘Wild West Canyon’ were much shorter than some of the other rides, but definitely got you just as soaked! The 2 person inflatables had you whizzing down tunnels in the dark before splashing out at the end. Both more traditional rides, but awesome nevertheless.

The ‘Tornado’ is the newest ride at Adventure Park in Geelong, and definitely worth a few go’s. Sat in a giant float of up to four people you slide in every possible direction, spinning round and emerging from the water looking like a drowned rat – exactly what we wanted from a water ride!

We loved the fact that in addition to the water rides, there were also your typical fairground rides and games such as a Ferris Wheel, mini golf and archery. It was a great way to take a break from the water, enjoy the sunshine and utilise our ridiculously competitive personalities.

All day, I kept feeling like I was forgetting something, but after constant checks of my phone, car keys and purse; I chalked it down to me not being used to wandering about in a swimsuit. It was only as we were leaving when I happened to glance into a mirror, seeing that I resembled a cross between Mr Krabs and Elmo, that I realised I’d forgotten the all important sunscreen! I honestly don’t know how I’d been so stupid to forget – especially since I’m so pale I practically get burnt under high wattage light bulbs! The car journey home was ridiculously painful and I’ve since been bathing in aloe vera gel and regret.

Sunburn aside, we had the best day and are definitely keen to start a water park tour of Australia. Next time, we’ll make sure we pack buckets worth of sunscreen – who knows, maybe it’ll help us speed down those slides even faster!