Pop-up food markets are always one of my favourite ways to spend an evening, so luckily for me, Melbourne is a master of them! Not only do you get to try a variety of really tasty food – but it’s often an indication that summer is finally here! Still struggling to get my head around the fact that summer in Australia is in November, but after having back to back winters, it’s definitely welcome!

Melbourne always seems to have a food market happening somewhere or other, laden with a variety of themes and cuisines to tickle your taste buds. Up until now, we’d only visited one since being here; the Winter Night Market in QV Market, which was just an awful experience! The space was really small, there was little to no seating and it was so crowded that you could barely get around, let alone start queuing to buy anything! We ended up giving up and heading to a restaurant instead of getting crushed between 1000’s of hangry foodies. As a lover of food markets, I was so disappointed at the thought that Melbourne, although being a food lovers paradise, maybe hadn’t got the memo on how to do a successful food market! Thankfully, we gave them a second chance, and the Night Noodle Markets not only redeemed Melbourne’s reputation, but also went above and beyond our expectations!

Situated outside in Birrarung Marr park, the Night Noodle Market has an array of tasty food stalls; specialising in noodles, rice bowls and bao buns – all to be enjoyed with the stunning backdrop of Melbourne’s CBD skyline in the distance. There were three main sections overall – with more than enough choice to satisfy your noodle cravings! There was ample seating, ample trashcans and ample space to get around without feeling like you’d be stampeded at any given moment! The weather cooperated for once, so we had a lovely summer’s evening nibbling away at our noodles on the grassy banks – what a great way to spend a Sunday night! 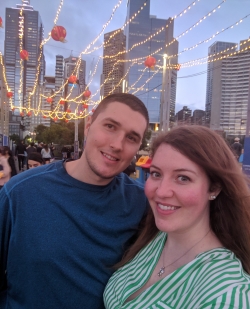 Normally at food markets I’m a force to be reckoned with. I go for as many courses as possible, stuffing myself to the brim before leaving with a heavy stomach and a light wallet! Maybe it was the Australian evening sunshine that slowed me down – but I just couldn’t try more than two items! I underestimated just how filling noodles could be – thankfully I had picked the two tastiest looking, eye-catching treats to try first, so I wasn’t disappointed when I couldn’t force anything else down!

First on the list was Puffle – a cheese based waffle filled with your choice of filling (cheeseburger or fried chicken) for $17. With a 40 minute wait to collect the food – it was clear that Puffle was the star of the Night Noodle Market! We opted for one of each in an attempt to judge the better filling, but both were extremely tasty and way too hard to choose a favourite. They were really filling, had lots of flavour and definitely didn’t scrimp on portion size! 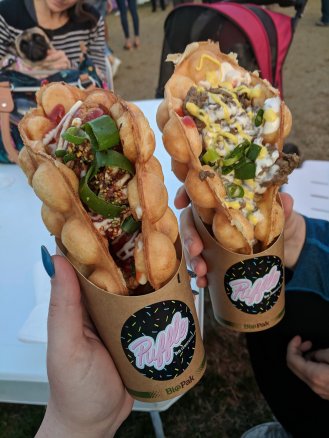 Next up, we decided to go for the crazy looking flying noodles that seemed to be floating past us everywhere we looked! After all, you can’t go to a noodle market and not try any noodles right?! I was in awe of the anti-gravity dinner, so opted for the $18 chicken tenderloin to try and suss out the secret behind the suspended noodles. Turns out, it wasn’t as magical as I’d hoped – and instead just noodles wrapped around a hidden fork, grounded with a baked potato. Not quite Hogwarts – but Instagrammable nevertheless! The noodles themselves were pretty bland, with not much taste- suppose flashy trumped flavour in this case!

Two dishes down and we were stuffed – regrettably leaving no room for dessert! The atmosphere was great, so we hung out for a little while longer, walking off our noodle calories, taking in the views and enjoying the little design touches that were dotted about everywhere. The organisers had clearly put in a lot of effort to maintain the ‘hawker centre’ vibe, while also injecting modernity and creativity as much as possible!

Unfortunately, when we visited it was the last day of the two week long Night Noodle Market, but it’s reinforced my love for food trucks, so I’ll be keeping an eye on Melbourne’s calendar for more tasty offerings in the next few months! The QV summer market is on – but after my last experience, I think I’ll be avoiding that and attempting somewhere else with a little more room to breathe instead. The hunt is on! 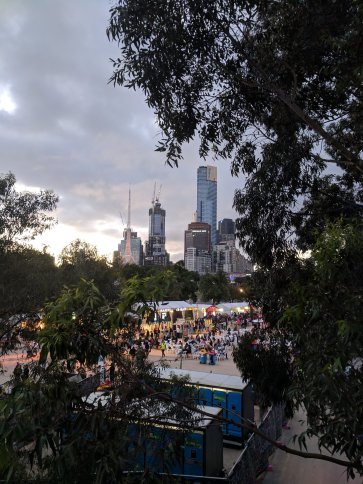