I’m a total horror movie addict, so Halloween has always been right up my street! I love being scared, get super excited to dress up in creepy fancy dress and carving a jack o’lantern has become somewhat of an annual ritual. London never really made a big deal about it, but living in America for two years elevated my love for Halloween even higher than I thought was possible! The effort that people put into decorating was insane – the houses were covered in cobwebs, the sidewalks lined with pumpkins and if you turned up to a party without a costume, you were the odd one out!

Melbourne didn’t seem to hold a candle for Halloween like America did, days went by  and there was only a slight whisper of a costume party or a themed event. There were articles in a few papers about how Ozzie’s were furious that the trend of trick or treating was starting to make it’s way over here, so I was starting to think my first Halloween out here was going to be a total dud. We hunted high and low for the best ways to spend Halloween here – and we were not disappointed! Our week long Halloween extravaganza was filled to the brim with ghostly activities and we absolutely loved it!

First on our list was Hauntville; a Halloween festival set up in Burnley Circus Park. The grounds were pretty empty – not quite the carnival spectacular we had expected from their marketing! The ‘food festival’ was literally two food trucks and the carnival games were pretty basic and overpriced. After seeing that, we weren’t really expecting much from the haunted houses as it seemed like quite an amateur set-up, but they were INCREDIBLE! We went to both Cirque du Slay and Yarra River Coffinworks, and honestly couldn’t pick a favourite! They both had their own unqiue qualities and scares – the actors and their costumes were fantastic, the interiors were decorated amazingly and we really enjoyed the whole experience! It was definitely worth the price and considering it was their first year we were super impressed.

Hot on the trail of haunted houses, we decided to visit Melbourne’s veteran Halloween event – Spooktober. It was absolutely rammed – costumed up visitors filled every inch by St Kinda Town Hall, a stark contrast to Hauntville! The set up was similar, just a more amped up version – the free candy being handed out was a definitive highlight that helped eliminate crowd stress! The queues to get into the houses were insane, with people needing to join one line to get their tickets scanned, another to sort you into your specified time slots and then a final line to get you through the door of the attraction; pretty ridiculous if you ask me. However, we finally made it into the first house (coven) after almost an hour of queuing – only to be super disappointed as it felt more geared to young children rather than adults. The design was great, with clearly a lot of thought put into it; but unfortunately the scares were non-existent. The second house (phobia) was totally different though! Lots of scares, lots of variety and the best part was that the ‘fearless’ boyfriend was finally petrified when a real life snake was presented to him – the house was worth it for his moment of terror alone! Overall, the houses at Hauntville were definitely better (and so were the queues!), but the atmosphere at Spooktober was a lot more impressive in comparison. Give Hauntville a few more years and I’m sure it will be just as awesome! 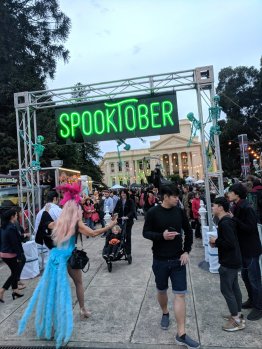 One thing that we really struggled to find when researching, was costume nights at nightclubs – which we had originally assumed was pretty standard everywhere?! Apparently not – unless it’s just not widely marketed. The seemingly biggest Halloween themed event was at CQ Nightclub in the CBD, the others we’d seen advertised mainly being pubs/bars with a costume event. We had no idea what to go as – we wanted to keep it relatively simple, as we’d left it with only a week to go, but didn’t want to go too basic, so we finally settled on trying to make it an Australian Halloween theme and go as Zombie surfers! My initial suggestion of me being a lifeguard/surfer and the boyfriend being a shark didn’t go down well – so equal footing it was! CQ seems to get a pretty bad rep online, but our experience there was great! Yes, it was very cheesy music (which we both love), yes, the crowd was pretty young (or are we now just pretty old?!), and yes only 60% of people had actually dressed up – but overall we had a great time!

In keeping with our ‘Australian Halloween’ theme, we decided that instead of buying overpriced pumpkins, we’d keep our jack o’lanterns more summery, and instead carve watermelons! That way, we’d not only have cute, summery little jack o’lanterns, but we’d also have food we both enjoy! So, hungover and home-bound because of Melbourne’s bipolar weather, meant we could spend the rest of our weekend binge watching horror movies and shows, while under a big duvet snacking on the never-ending watermelon that our jack o’lanterns produced. Binge-watching The Haunting of Hill House was a perfect choice for a drizzly spooky weekend!

To finish off our Halloween spectacular, we decided to do the haunted bookshop ghost walk – a popular 2 hour walking tour around the spookiest spots in the CBD. What a total waste of time it was! We left halfway through as it was the most bizarre tour we’d ever been on. Fair enough, creating a spooky atmosphere is hard when you’re trying to tell second hand ghost stories on a busy main road, but there was no creativity injected at all! All of the ‘haunted tales’ were just half-told stories about someone telling him they had once seen a ghostly figure in a specific spot. There was no history, no backstory and nothing chilling, or even slightly creepy about any of his stories. The only remotely scary thing about the entire walk was the prospect of being hit by a car as our group of 30 people wandered down side roads. Such a shame for two horror fanatics! Definitely not worth the time, money or effort to bother going, and if you do, look out for my ghost, as I definitely died of boredom during this snoozefest!

Overall, our initial fears of Halloween going unnoticed in Melbourne were definitely unwarranted. We had a great time exploring all the different choices and options on offer and, CBD ghost walk aside, would do every single one of them again! The countdowns already on for next year – must Google shark costumes ASAP!

*Click below for the Halloween themed Vlog featuring all the activities we did!*
↓
Halloween in Melbourne Vlog!

2 thoughts on “Things That Go Bump In The Night…”